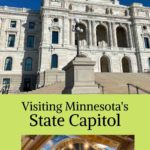 The current Minnesota State Capitol building is actually the third state capitol, built after the first burned in 1881, and the second replacement capitol was deemed too small and poorly ventilated. The current capitol building was designed by renowned architect Cass Gilbert. Work began on the capitol in 1896, its corner-stone laid July 27, 1898. Construction was completed in 1905. The capitol cost $4.5 million to build.

Today, after an extensive renovation that took several years, the State Capitol makes for a lovely tour, and a history and art lesson for both young and old. Perhaps the impression the Capitol makes is best summed up by the exclamation of my five-year-old grandson, who first said, simply, “Wow,” upon his first view of the façade, and then amplified this to, “This is awesome,” when he got inside.

The various views of the Capitol, especially from the inside, benefit not only from Gilbert’s original vision, but from an extensive four-year restoration of the Capitol between 2013-2017. As the Minnesota State Historical Society guide described the process, it primarily involved scraping layers of soot off every surface that had accumulated over years of heating the building with fireplaces…and allowing tobacco smoking in the building.

The 20 varieties of stone that went into the construction of the walls and columns are luminescent in the sunlight that pours in through the windows in the dome. But the real beneficiaries of the restoration were the cleaned and repainted murals that highlight the walls of the rotunda and the various chambers. The restoration cost over $300 million.

The upper reaches of the rotunda are lined with four allegorical paintings by the artist Edward Simmons representing “The Civilization of the Northwest.” The Senate and House Chambers also feature allegorical murals.

A guided tour, whether conducted by the Historical Society, or on your own with a brochure and map provided by the Historical Society is worth your time, and will take you to the House and Senate chambers and the Supreme Court. On nice days, you’ll also get to go on the roof to see the chariot and four golden horses, called the Quadriga. Usually the tour will also include the Governor’s Reception Room, when it’s not in use. Unfortunately, we didn’t get to see it on our tour.

Finally, be sure to check out the flag displays on the first floor. On a rotating basis, the Capitol displays many historical flags used by Minnesota troops dating all the way back to the Civil War, including flags carried at the battles of Bull Run and Gettysburg.

The Capitol is open Monday through Friday from 8 a.m. to 5 p.m. Admission is free. Tours are given by the Minnesota State Historical Society on the hour during those times and are also free, although a $5 donation per person is customary.

This website uses cookies to improve your experience while you navigate through the website. Out of these cookies, the cookies that are categorized as necessary are stored on your browser as they are essential for the working of basic functionalities of the website. We also use third-party cookies that help us analyze and understand how you use this website. These cookies will be stored in your browser only with your consent. You also have the option to opt-out of these cookies. But opting out of some of these cookies may have an effect on your browsing experience.
Necessary Always Enabled
Necessary cookies are absolutely essential for the website to function properly. This category only includes cookies that ensures basic functionalities and security features of the website. These cookies do not store any personal information.
Non-necessary
Any cookies that may not be particularly necessary for the website to function and is used specifically to collect user personal data via analytics, ads, other embedded contents are termed as non-necessary cookies. It is mandatory to procure user consent prior to running these cookies on your website.
SAVE & ACCEPT
70 shares