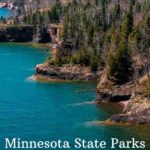 There are 75 Minnesota State Parks and Recreation Areas spread all over the state of Minnesota. The parks offer camping, hiking, canoeing, cabin stays, and more.

You can zoom in on this map to see park locations in any area of the state. The markers are clickable and will take you to our post about that park. If we’ve been there yet…

A $35 year-round vehicle permit to Minnesota State Parks provides unlimited visits to all 75 parks and recreation areas for a full year from the month of purchase. Plus, you can receive a discount on additional year-round permits for other vehicles you own.

Active duty military and their dependents, recipients of a Purple Heart medal, and veterans with any level of service-connected disability can get a free vehicle permit.

If you are a Minnesota resident, an alternative to the window sticker permit is the Minnesota State Parks and Trails license plate that provides you with unlimited visits to all 75 parks and recreation areas for an entire year, without requiring a separate vehicle permit. The new plate costs $70, plus tax, including the one-time $12.50 fee for the plate itself and a minimum $60 donation which renews annually. The additional fees go to support the Parks. The plate is available at Driver and Vehicle Services (DVS) offices statewide, the same place you go to renew your driver’s license and tabs. Note though, there is no veterans discount available on the Minnesota State Parks and Trails specialty license plate.

Camping fees are separate from vehicle fees. State Park camping permits are best purchased online before you go. Overnight camping fees currently vary between $16-24 per night depending on the park and its facilities. Some campgrounds are not open in the fall or winter. Be sure to check with the park before making plans.

Reservations for camping spots open 120 days ahead of the first day of your stay. It’s advisable to book your spots as early as possible, as the spots fill up fast.

Ski Pass fees go directly toward grooming trails in Minnesota’s cross-country ski trail system. The costs of the pass are:

You can buy your Great Minnesota Ski Pass here.

The Minnesota Department of Natural Resources (DNR) is the management agency for the Minnesota State Parks and recreation areas.

This website uses cookies to improve your experience while you navigate through the website. Out of these cookies, the cookies that are categorized as necessary are stored on your browser as they are essential for the working of basic functionalities of the website. We also use third-party cookies that help us analyze and understand how you use this website. These cookies will be stored in your browser only with your consent. You also have the option to opt-out of these cookies. But opting out of some of these cookies may have an effect on your browsing experience.
Necessary Always Enabled
Necessary cookies are absolutely essential for the website to function properly. This category only includes cookies that ensures basic functionalities and security features of the website. These cookies do not store any personal information.
Non-necessary
Any cookies that may not be particularly necessary for the website to function and is used specifically to collect user personal data via analytics, ads, other embedded contents are termed as non-necessary cookies. It is mandatory to procure user consent prior to running these cookies on your website.
SAVE & ACCEPT
39 shares