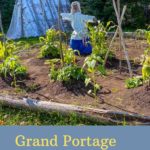 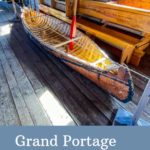 The Grand Portage National Monument is an entertaining and informative journey back into the history of the earliest fur trading economy of Minnesota. From mid May to mid October, costume clad docents will lead your through the reconstructed trading outpost and enlighten you on the earliest encounters between the Ojibwe (Chippewa), the French Canadian Voyageurs, and the English/Scottish Northwest Trading Company–a relationship that lasted from the mid-17th to the early 19th Century.

The Voyageurs (French for travelers) were the hardy French Canadians who braved the winters of western Canada to trap beaver themselves as well as exchange trade goods with Indian trappers. Each spring, as the frozen waters opened, the route from western Canada led through what is now Voyageurs National Park and the Boundary Waters Canoe Area to the Pigeon River that is now the border between the United States and Canada. The last stretch of the Pigeon River in unnavigable by boat, and so the end of the long canoe voyage from western Canada was an 8.5 mile carry around rapids and waterfalls to the shore of Lake Superior. (You can see the highest waterfall in Minnesota at Grand Portage State Park, six miles from the Grand Portage National Monument.

The post at Grand Portage (which is actually two French words meaning long carry,) became the meeting point for the Voyageurs, the Ojibwe Indians who provided services to the Voyageurs such as food and canoes and furs they had trapped, and the European traders and French Canadians from Quebec (called the Montrealers) who collected the furs and sent them via the Great Lakes and Saint Lawrence to Europe and the fashionable cities of the eastern United States. These meetups of the western Voyageurs and eastern traders usually happened in late May and lasted a few months. In July, the Voyageurs, now loaded with trade goods brought to Grand Portage by the eastern Canadians and Europeans would head west again to repeat the process.

The Ojibwe at Grand Portage provided essential services to the Europeans, especially teaching them to how make birch bark canoes and guiding them through the wilderness. Trade goods received in return included glass beads from Venice and such useful items as woolen blankets, metal cook pots, axes, knives, traps, and guns. And whiskey.

From 1784 to 1803 the North West Company ran the most profitable fur trading business on the Great Lakes. The wealth of the company was reflected in the Grand Portage log palisade, which enclosed a warehouse, a large building that served as the kitchen for the gathered traders, and a great hall which sheltered and fed the Europeans. While the Voyageurs and Montrealers were relegated to camping outside the stockade, the English and Scots of the North West Company lived in relative luxury which included dining on China and glassware brought from home.

The Grand Portage National Monument consists of a visitors center (which is currently closed due to Covid-19 restrictions,) and a stockade and other trading post buildings reconstructed on the post’s original foundations. Also, just outside the stockade’s walls is a reproduction of an Ojibwe camp where you can get demonstrations of everything from drying and smoking fish to gardening and birch bark canoe building.

Within the stockade, there are also guides who are expert on the life of the traders and the workings of the Grand Portage trading post. As is typical of the United States National Park Service, the information available at Grand Portage is extensive, entertaining, and excellently presented.

You can see all my posts from my trip to the North Shore here.

Where to stay on the North Shore

I based my latest exploration of the North Shore from a beautiful apartment in Two Harbors that I found on AirBnB. If you book it, we’ll receive a small commission at no additional cost to you. If you’re not an AirBnB member, join AirBnb here, and you’ll get up to $65 off your first stay.

The Grand Portage National Monument is one of six U.S. National Park sites in Minnesota.

This website uses cookies to improve your experience while you navigate through the website. Out of these cookies, the cookies that are categorized as necessary are stored on your browser as they are essential for the working of basic functionalities of the website. We also use third-party cookies that help us analyze and understand how you use this website. These cookies will be stored in your browser only with your consent. You also have the option to opt-out of these cookies. But opting out of some of these cookies may have an effect on your browsing experience.
Necessary Always Enabled
Necessary cookies are absolutely essential for the website to function properly. This category only includes cookies that ensures basic functionalities and security features of the website. These cookies do not store any personal information.
Non-necessary
Any cookies that may not be particularly necessary for the website to function and is used specifically to collect user personal data via analytics, ads, other embedded contents are termed as non-necessary cookies. It is mandatory to procure user consent prior to running these cookies on your website.
SAVE & ACCEPT
47 shares