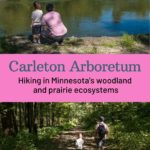 The Carleton College Arboretum, known as “the Arb” to generations of Carleton students, consists of 800 acres (360 hectares) of prairie and wood on land adjacent to the College. The Arboretum was created under the leadership of Carleton President Donald J. Cowling and Professor Harvey E. Stork in the 1920s. Now, the full name of the Arb is the Cowling Arboretum, and the planted forest in the Upper Arb bears the name of Stork.

Professor Stork, and Superintendent of Grounds D. Blake Stewart were responsible for much of the early development of the Arb, and their influences can still be seen. Stork and Stewart were remarkable land managers, and were among the nation’s first restoration ecologists. Their planting of upland forest trees and wildflowers in the Upper Arb (Stork Forest) decades ago is now coming to maturity nearly 100 years later. If you’re interested, Carleton has a long article on the history of the Carleton Arboretum on its website.

We must admit having a special affinity for the Arb. Both Kris and I are Carleton alumni, and our son also went to school there. So when Matt suggested a few weeks ago that we go for a hike with his son in a local park, I suggested, “How about the Arb?”

Carleton graciously opens the Arb to the public year round. The rules are pretty simple: hiking is allowed; no camping and no fires. Feel free to bring your dog, as long as you keep him on a leash and pick up anything he leaves behind. Bikes are allowed in the Upper Arb, which is on higher ground. Bikes are not allowed in the wetter, lower, Lower Arb. In the winter, the trails in both the Upper and Lower Arb are groomed for cross country skiing. The paths are multi use, though, so skiers have to be wary of walkers and snowshoers. Drone use is not permitted without express written permission from the Arboretum Director.

The Arboretum is a also state game refuge, so there is no hunting, with the exception that archery hunting is permitted by permit issued by Arboretum Staff in order to control the deer population. Public use in the Lower Arboretum is restricted to the trails during the hunt between Thanksgiving and January 1.

The Carleton Arboretum has a 15-mile hiking trail system that has been ranked by Runner’s Magazine as the top place to run in Minnesota, and one of the top 10 in the country. When we took our walk before the start of the school year, we did meet several runners on the paths, as well as several other walkers. It is a popular spot for the locals as well as the college crowd.

The walk we took in the Lower Arb pretty much followed a path down the Cannon River for a couple of miles on a wide groomed path through a thick wood. Because of the general wet of the path, there are going to be lots of mosquitoes, so don’t forget your repellent. The path follows the river valley and you sometimes get quite close to the water, and other times veer off and lose sight of the river. Near the end of the path that follows the river, there’s a spur that will take you back right down to the river side at the site of a long-gone bridge. You can still see one stone piling in the middle of the channel.

After completing the shady hike along the river, you can turn to your right, go up the hill a bit and come out of the wood onto a path that leads through tall prairie grasses and takes you back to the main campus. It’s a completely different ecosystem, and exemplary of so many other spots like it in southern Minnesota: an ancient prairie that turns abruptly into a dense wood by the water.

The prairie on our warm summer day was full of birds, butterflies, and bees in the air. And to the delight of our four-year-old companion, lots of beetles and grasshoppers on the ground.

The entire hike was about three miles, because we started in the center of campus after a brief nostalgic walk around the old haunts. The Arb portion of our hike was about 2.6 miles (4.2 kilometers.) You can download and print maps of the Upper and Lower Arb.

Carleton College is in Northfield, about 45 miles from the Twin Cities. To get there from Minneapolis you can take I-35 South to the Highway 19 exit, then east a few miles. From the Saint Paul side, you might want to take either Highway 3 or 52. Highway 3 goes direct into Northfield; from 52 you’ll have to jog west on 19. The Arb entrance is right on 19, so you’ll end up there sooner or later.

You can enter the Lower Arb just north of the Carleton football stadium, where there is limited parking. There is also parking in some spots along Highway 19. For the Upper Arb, there is parking behind the Carleton Recreation Center.

Any cookies that may not be particularly necessary for the website to function and is used specifically to collect user personal data via analytics, ads, other embedded contents are termed as non-necessary cookies. It is mandatory to procure user consent prior to running these cookies on your website.