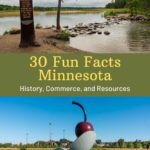 No individual likes being lumped into a group description, and no state can be accurately depicted by a state motto. Minnesota is more complex than it appears. It has earned its reputation as a forward thinking and creative place. It’s healthy, active, and (nowadays mostly) respectful of nature–at the same time as being entrepreneurial, industrious, and ambitious.

That’s how Minnesota myths are made, encompassing both Betty Crocker and Paul Bunyan. We don’t pretend to encapsulate the entire state here, but to touch on a few interesting facts about Minnesota which together sow the seeds of statehood.

Minnesota is known for its lakes

Minnesota, dubbed “The Land of 10,000 Lakes,” actually has 11,842 lakes larger than 10 acres. Typical Minnesota modesty. Minnesota also has more shoreline than any other state but Alaska, with almost 90,000 miles of lakeshore. Otter Tail County, in northwest Minnesota, has 1042 lakes.

Lake Superior, on Minnesota’s northeast border, is the world’s largest freshwater lake. It’s at the end of the St. Lawrence Seaway which brings boats from around the world to the port of Duluth. The twin ports of Duluth and Superior, Wisconsin, are the 17th largest ports in the United States.

The largest lake entirely within Minnesota is Red Lake (Upper and Lower.) Lake of the Woods on the Canadian border and Lake Superior are both larger, but are only partially in Minnesota.

There are 818,000 boats registered in Minnesota. That’s one for every 6.7 residents.

The state fish of Minnesota is the walleye.

The Mississippi and other Minnesota rivers

Minnesota’s rivers and streams add up to 69,200 miles in length.

Minnesota actually gets its name from the Minnesota River. The word originally comes from the Dakota word “Minisota,” which means sky-tinted or cloudy water.

Minnesota’s rivers and streams flow in three directions: north to Hudson Bay, east to the Atlantic Ocean, and south to the Gulf of Mexico.

There are two designated National Scenic River areas in Minnesota: the 72-mile stretch of the Mississippi starting north of the Twin Cities and the Saint Croix River on the eastern border of Minnesota.

Other natural features of Minnesota

The highest point in Minnesota is Eagle Mountain, located in the northeast arrowhead region. Eagle Mountain Trail is a 3.5 mile (5.6 km) hike to the 2301-foot (701 meters) summit of Eagle Mountain. A good portion of the trail is within the Boundary Waters Canoe Area Wilderness. Grand Marais is the closest town to Eagle Mountain.

The lowest point in Minnesota is the surface of Lake Superior at 600 feet (183 meters.)

Minnesota has more bike trails than any other state in the country.

The Minnesota Department of Natural Resources (DNR) manages 3,134,900 acres of land – nearly twice the size of the state of Delaware. There are 75 Minnesota State Parks and Recreation Areas managed by the DNR.

Minnesota is the northernmost of the lower 48 states. The Northwest Angle, part of northern Lake of the Woods County, is the only place in the United States outside Alaska that is north of the 49th parallel. The Northwest Angle is the result of a surveying error made in 1783. The error wasn’t discovered until 14 years later, after the American and Canadian border had been established. The NW Angle is only accessible within the U.S. by water. If you want to reach it by land, you need to go through Canada.

Minneapolis is the coldest major city in the U.S. with an average of 24 sub-zero (F) days each year.

The state record low temperature in Minnesota was recorded at Tower, near Lake Vermillion in northeast Minnesota, on February 2, 1996. The low was -60 degrees Fahrenheit (-51 C.)

Scotch Tape and Post-it notes were invented in Minnesota. As were Rollerblades, Wheaties, the pop-up toaster, the furnace thermostat, the heart pacemaker, and the in-ear hearing aid. The inventor of the hearing aid, Ken Dahlberg, figured in the Watergate scandal. A check made out to Dahlberg was a key to connecting the Watergate scandal to President Richard Nixon’s re-election campaign, though Dahlberg himself was not accused of any wrongdoing.

Minnesota is home to the largest privately held company in the United States: Cargill. It is also home to 16 Fortune 500 companies, including United Health, Target, Best Buy, 3M, and General Mills.

Water skis were invented in 1922 by Ralph Samuelson, who steam-bent 2 eight-foot-long pine boards into skies. He took his first ride behind a motorboat in Lake City.

The first enclosed shopping mall in the United States was Southdale, in Edina, a suburb of Minneapolis. It was built in 1956.

Minnesota is the top turkey-producing state, producing around 45 million per year.

The Old Log Theater in Excelsior is the oldest continuously operating live theater in the United States.

President (then Vice President) Theodore Roosevelt delivered his “Speak Softly and Carry a Big Stick” speech at the Minnesota State Fair in 1901.

On December 26, 1862, 38 Dakota Indians were hanged in Mankato in the largest mass execution in American history.

The first successful open-heart surgery was performed on a 5-year-old girl on September 2, 1952, by Dr. Floyd John Lewis and Dr. Clarence Walton Lillehei at the University of Minnesota.

Canadians and New Englanders of English, Scottish, and Scotch-Irish descent first settled in Minnesota in the early 19th century.

The first major immigrant groups in the latter half of the 19th century were Germans, Swedes, and Norwegians. Now, about one in four Minnesotans is at least partly of Scandinavian origin, but those of German descent constitute the single largest ethnic group in the state.

The Native American population in Minnesota is primarily Ojibwa (also called Chippewa or Anishinaabe), about half of whom live in the Twin Cities area.

This website uses cookies to improve your experience while you navigate through the website. Out of these cookies, the cookies that are categorized as necessary are stored on your browser as they are essential for the working of basic functionalities of the website. We also use third-party cookies that help us analyze and understand how you use this website. These cookies will be stored in your browser only with your consent. You also have the option to opt-out of these cookies. But opting out of some of these cookies may have an effect on your browsing experience.
Necessary Always Enabled
Necessary cookies are absolutely essential for the website to function properly. This category only includes cookies that ensures basic functionalities and security features of the website. These cookies do not store any personal information.
Non-necessary
Any cookies that may not be particularly necessary for the website to function and is used specifically to collect user personal data via analytics, ads, other embedded contents are termed as non-necessary cookies. It is mandatory to procure user consent prior to running these cookies on your website.
SAVE & ACCEPT
352 shares