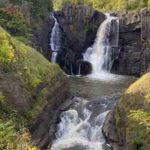 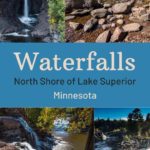 If you want to walk in some of the most beautiful spots in Minnesota, consider a waterfall tour of the North Shore of Lake Superior.

In the 170-mile drive along Highway 61 from Jay Cooke State Park just south of Duluth to Grand Portage State Park on the Canadian border there are nine state parks with dozens of waterfalls within walking distance of a parking area.

Jay Cooke State Park is the perfect day trip from Duluth, or even the Twin Cities. The central feature of the park is the Saint Louis River, which is the largest Minnesota tributary of Lake Superior.

The Silver Creek trail starts out with a walk across the Saint Louis River on the so-called Swinging Bridge, where you can stop for photos up and down river. The Swinging Bridge is a reconstruction of the original Civilian Construction Corps bridge built in the 1930s. The original was wiped out by floods in 1950 and 2012. The reconstructed bridge was raised 7.5 feet to protect it from future flooding.

At the end of the bridge, take an immediate left, clamber up a few rocks and you’ll find yourself on the Silver Creek Trail. The trail follows the river down stream for about a mile, although you’ll be above the water with limited views. If you want, there’s a little side trail that leaves the main trail soon after you start. It’s the “River Trail” and will take you on a short loop at river level before leading you back up to the main Silver Creek Trail.

The trail along the river will pass close to many rapids. Indeed pretty much the entire Saint Louis River in the park is rapids. The waterfalls are smaller than many you’ll see further north, but the views are nonetheless dramatic as the white water is contrasted with the black slate common to the park.

If you are looking for waterfalls near Duluth, you don’t have to go too far to get to the most popular falls in Minnesota at Gooseberry Falls State Park.

Just 40 miles up Highway 61 from Duluth, Gooseberry Falls is perhaps the easiest to access of all the beautiful Minnesota waterfalls.

The falls themselves are just a few hundred yards up a paved path that runs under the Highway 61 bridge from the state park parking lot. You’ll be presented with a head on view of the falls as you approach, but if you continue up the path a bit to the left, you’ll get this view looking over the falls and back down the Gooseberry River as it makes its short journey to Lake Superior. I like this view better.

And, when the water level is low, you can walk (carefully!) out on to the rocks and cross almost all the way over to the other side. Be very careful.

Once you know that Tettegouche State Park has the tallest waterfall in the state, that sort of makes it an obligatory visit. But, unlike neighboring Gooseberry Falls State Park, where the falls are but a short easy walk from the parking lot, Tettegouche’s High Falls are going to require more effort.

The trail to the Tettegouche High Falls starts from the lower parking lot that’s just to the south of the Visitors Center. (You can save a few steps by parking in that lower lot.) Right away out of the lot, you’re going to be climbing up some steps that are a taste of what’s to come: an uphill hike of a mile and a half.

When you make that 1.5 mile climb, you’re not quite there yet. You’ll get to a sign that tells you that your view of the High Falls is 83 steep steps down to the river level. While you’re down there, take your time. Sit on the rocks or on the solidified lava flows and admire the dramatic view. Catch your breath, because your next challenge is going to be going back up those 83 steps.

The initial walk up to the first waterfall at Temperance River State Park is a bit surprising. Instead of the usual verdant Minnesota landscape, you’re mostly traversing pitted black basalt rock. In other words, solidified volcanic flows that have been carved by fast flowing water over millennia into canyons a hundred feet deep. So deep that in many cases as you walk the rim you can hear the water, but you can’t see it in the twisted chasm.

You do eventually get to a spot where the waterfalls haven’t yet carved such a deep tunnel that you can’t peer over the overhangs to actually get a peek at the rushing water. But keep climbing, because every turn of the first half mile is a new view of the gorge and a new waterfall. In all Temperance River is perhaps the most dramatic landscape of all the Minnesota State Parks.

Although Cascade River State Park has more than 18 miles of hiking trails, it also features one of the shortest paths to the main attraction. There’s a brief, easy, half mile loop from the parking lot right on Highway 61 to the main falls and back. Sometimes when you’ve spent a good part of the day hiking other waterfall locations on the North Shore, such as Temperance River or Devil’s Kettle, a short hit is just what you want at the end of the day.

You can park at the lot at the trail head and be back at the car in about 20 minutes, photo of the high white falls against the black basalt rock in hand. There is, of course, more to Cascade River State Park, including more falls upriver only a short walk longer. In fact, the Cascade River flows over one ledge after another for a total drop of 900 feet in the last three miles before it reaches Lake Superior.

When you’re visiting all the North Shore waterfalls, you might consider staying in the beautiful town of Grand Marais.

It’s one of the great geological mysteries of Minnesota. The Brule River runs through the Judge C.R. Magney State Park until it encounters a rock outcropping and splits into two waterfalls. The water from the east side of the rock continues down the river, but the west side of the river circles a large rock, falls into a pothole, and…disappears into the Devil’s Kettle.

For years, it was thought that the water poured into the fissure somehow emerged via some magical tunnel to the bottom of Lake Superior. That was the theory anyway after attempts to trace the flow by tossing everything from ping pong balls to logs into the Kettle proved fruitless. Subsequent water volume measurements have determined that the missing water re-emerges into the Brule River a ways downstream from the falls.

It’s an uphill hike of a bit more than a mile from the Judge C.R. Magney parking lot to the falls overlook. Just below the Devil’s Kettle is another small falls you can go down a long flight of around 180 stairs to see. The Devil’s Kettle is just about a mile and a half from the north shore of Lake Superior, just a few miles south of the U.S.-Canada border, 14 miles up Highway 61 from Grand Marais.

Out of the parking lot just off Highway 61 is an easy half-mile (800 meters) asphalt paved hiking trail that leads to a section of boardwalk and three viewing platforms giving different angles on the falls. The first and third platforms are up some stairs, but the middle one is accessible to wheelchairs, a rarity in the state parks.

The High Falls, and many other waterfalls and rapids along the last stretch of the Pigeon River, are what gave the site its Grand Portage name. Early traders had to carry their cargoes overland for the last 8.5 miles to the Superior shore because the river could not be navigated by canoe.

Some other easily reachable waterfalls in Minnesota, that won’t involve a trip to the North Shore include Minnehaha Falls in Minneapolis, Minneopa State Park near Mankato, and the falls at the Pipestone National Monument.

See the list of all Minnesota State Parks, including basic permit information. We’re adding our commentary for all the state park sites as we visit them.

And, see some fun facts about Minnesota on this page.

This website uses cookies to improve your experience while you navigate through the website. Out of these cookies, the cookies that are categorized as necessary are stored on your browser as they are essential for the working of basic functionalities of the website. We also use third-party cookies that help us analyze and understand how you use this website. These cookies will be stored in your browser only with your consent. You also have the option to opt-out of these cookies. But opting out of some of these cookies may have an effect on your browsing experience.
Necessary Always Enabled
Necessary cookies are absolutely essential for the website to function properly. This category only includes cookies that ensures basic functionalities and security features of the website. These cookies do not store any personal information.
Non-necessary
Any cookies that may not be particularly necessary for the website to function and is used specifically to collect user personal data via analytics, ads, other embedded contents are termed as non-necessary cookies. It is mandatory to procure user consent prior to running these cookies on your website.
SAVE & ACCEPT
1.1K shares