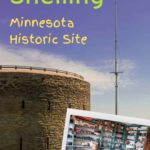 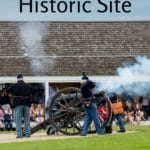 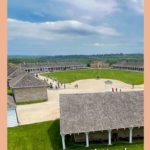 A visit to the historic Fort Snelling gives a lesson in basic Minnesota and United States history from the earliest days of European settlement of the area through the fort’s role in World War II.

Fort Snelling was built, starting in 1820, on the bluffs overlooking the confluence of the Minnesota and Mississippi Rivers. The military site was initially named Fort Saint Anthony, but it was renamed Fort Snelling, after its architect and first commandant Colonel Josiah Snelling, when its construction was completed in 1825.

The fort itself is on the National Register of Historic Sites and is administered by the Minnesota State Historical Society. The land below the bluffs and along the rivers is now the Fort Snelling State Park. The park is administered by the Minnesota Department of Natural Resources. The fort is also within the Mississippi National River and Recreation Area, a National Park Service unit.

A tour of the fort buildings includes a lot of original and reconstructed evidence of what life at the fort was like during the earliest days of its establishment and up through the Civil War. Exhibits include reconstructions of quotidian early life such as squad barracks of spare bunk beds, married enlisted men’s quarters, an officer’s somewhat less sparse accommodations, all the way up to the commandant’s home, complete with a dining room set with fine china.

There is the carpenter’s shop, with its 19th Century workbenches and tools that built the fort’s furnishings. And the sutler’s store, with hints of what products were available to the post’s soldiers. There’s also a school room, where the soldiers’ children were taught, and the blacksmith’s shop.

There is the infirmary, with its stark examination and operating table, and an attendant display of surgical instruments, including the too-often used bone saw that had children gasping at the idea of its use. The medical exhibit includes information on when the Fort was used as a hospital during World War I.

Although it’s not fully built out yet, your visit to Fort Snelling starts with the newly opened (as of May 2022) Plank Museum and Visitor Center, which is in the old cavalry headquarters building between the parking lot and the fort itself.

So far, the Plank Museum is mostly standing placards that provide some detail the interesting history of the fort. For example, in its earliest days, Fort Snelling served as an outpost, if you will, of slavery in the northern supposedly free territories and states. In fact, Dred Scott, a slave whose name is on the most infamous decision of the United States Supreme Court was a slave to the post doctor, John Emerson. It was Emerson bringing Scott and his wife what was then the Wisconsin Territory that led Scott to petition the courts for his freedom.

Here, you can also take note of the Fort’s role in the Sioux uprising of 1862, during the American Civil War. Civil war troops were diverted to Fort Snelling to put down the Indian revolt, and the Fort was the scene of the execution of some of the Indian leaders.

The displays also include much information on the Fort’s role as a Japanese language school during World War II. In particular, Japanese-Americans who had been interned were allowed to join the United States army and train intelligence officers in the Japanese language during the war.

After you’ve visited the Fort, take the time to stroll back to the parking lot along the river walk and get a glimpse of the Mississippi, perhaps not too different than it looked almost 200 years ago, minus the power lines and Minneapolis skyline of course.

Admission is $12 for adults, and $10 for seniors and college students with ID. Children aged 5-17 are $8. Admission is free for Minnesota Historical Society members, military veterans and family, native Americans and families, and active military and families (walk up only.) Tickets may be purchased in advance online, through the box office at 651-259-3015, or at the visitor center.

You can get more information on events at Fort Snelling and other Minnesota Historical Society sites.

This website uses cookies to improve your experience while you navigate through the website. Out of these cookies, the cookies that are categorized as necessary are stored on your browser as they are essential for the working of basic functionalities of the website. We also use third-party cookies that help us analyze and understand how you use this website. These cookies will be stored in your browser only with your consent. You also have the option to opt-out of these cookies. But opting out of some of these cookies may have an effect on your browsing experience.
Necessary Always Enabled
Necessary cookies are absolutely essential for the website to function properly. This category only includes cookies that ensures basic functionalities and security features of the website. These cookies do not store any personal information.
Non-necessary
Any cookies that may not be particularly necessary for the website to function and is used specifically to collect user personal data via analytics, ads, other embedded contents are termed as non-necessary cookies. It is mandatory to procure user consent prior to running these cookies on your website.
SAVE & ACCEPT
318 shares