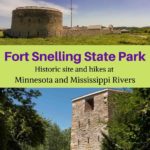 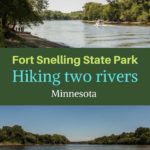 Note: this post has been updated slightly because, as of May 2022, the Fort Snelling Historical Site and the attendant visitor center is now open to the public. Also take note, that as of May 2022, the swollen Mississippi River has inundated some of the park’s hiking paths discussed here. Be sure to check current status of the paths before planning your visit. While some of Fort Snelling State Park is flooded, you might consider an alternative walk around the nearby Coldwater Spring historic site.

Fort Snelling State Park is a day hiker’s paradise, with at least three hiking routes out of the main parking lot that lead to interesting conclusions. You can take a mile and a half round trip visit the historic fort itself (when it’s open.) You can take a short hike of about a mile round trip out to the spot where a small channel of the Minnesota meets the Mississippi at the west end of Pike Island. And, you can take a three-mile circumnavigation of Pike Island following the main channel of the Minnesota River along the south side of the island to where it meets the Mississippi at the east end of the island. From there, follow the path back along the north side of the island along the Mississippi back to your starting point.

The walk up to the historic Fort Snelling is, since its reopening in May 2022 after extensive renovations and the opening of the attendant museum, worth the hike. The fort site itself is managed by the Minnesota Historical Society.

But even when the fort site is not open, you can still walk around the walls and admire them and the chapel from the outside. There are several placards that give a bit of information about the fort, but they’re minimal. If you have a choice, come between Memorial Day and Labor Day when the Fort is open and provides some context to the outdoor offerings of Fort Snelling State Park.

Now that the fort is open, keep your eye on the MNHS website to plan a visit. Fort Snelling has an important place in Minnesota History and it’s worth learning a bit about it.

One thing you can see on the outside of the fort site is the grave of Elizabeth Snelling, the first white child born in Minnesota in September 1820. She died 13 months later. The headstone was actually placed in 1926 and the gravesite was moved to the current location in front of the chapel in 1940. But there’s something moving about it, especially because it’s been overtaken by a very small patch of prairie, in contrast to a manicured site you might expect. It sits in an overgrown shady spot that somehow seems more fitting for the grave of an infant.

For another bit of history of Fort Snelling, check out the Coldwater Spring National Park Service site, not too far away.

After coming down the hill from the fort, you’ll see a sign with a map of the park. (You probably saw this sign before you walked up to the fort.) As you look at the sign, take the path that leads to your right into a wood. In just a short while, you’ll reach the point where the channel of the Minnesota that runs to the north of Pike Island meets the Mississippi.

It’s a very calm spot and it even seems that the Minnesota at this point is running in the opposite direction. I don’t know why it seems so, but if it is, it defies logic. Perhaps just the small volume of this branch meeting the fast and deep Mississippi leads to the sense of backwater. Or maybe even the flow of the big river is pushing the waters of the Minnesota back where they came from. I’ll have to ask a river expert.

The culmination of the Fort Snelling State Park visit is the hike around Pike Island to the confluence of the main channel of the Minnesota with the Mississippi. Follow the signs and map to a small footbridge that leads to Pike Island. Note: if you’re on a bike, you have to leave it before the bridge. There’s a place to lock it up.

When you cross the bridge to the island, there will be a sign with a map right in front of you, but be careful, it’s a bit confusing. (Minnesota State Parks in general are not the best at signage. They’d do better to have sign posts pointing you in the right direction instead of maps that don’t tell you exactly where you are.)

If you want to walk the Mississippi (north) side first out to the convergence point, no problem. From the sign, just go to your left. The river and path are right there in view and it’s not too hard to figure out.

The problem arises if you want to walk the Minnesota River side first. There’s a path starting just to the right of the map sign that looks like it. Don’t be fooled, like we were. That’s a path right through the middle of the island that is (eventually) marked as a winter ski trail. It will get you to the point of the island, and it’s shady and a nice walk. But, it’s not along the river.

The hike out to the point of convergence is a three-mile round trip, whichever route you take. The trails are wide and well maintained, which allow you to either dawdle and admire the iconic rivers, or step lively and get the heart rate up.

Either way, Fort Snelling State Park is a beautiful wooded oasis in the middle of the cities. The very thing that makes the Twin Cities so attractive for both urban and outdoor fans.

Note: the park also features a three-mile-long bike and hike path on the other side of the Minnesota River upstream to the southwest. That path is currently (as of August 2020) closed due to river flooding.

This website uses cookies to improve your experience while you navigate through the website. Out of these cookies, the cookies that are categorized as necessary are stored on your browser as they are essential for the working of basic functionalities of the website. We also use third-party cookies that help us analyze and understand how you use this website. These cookies will be stored in your browser only with your consent. You also have the option to opt-out of these cookies. But opting out of some of these cookies may have an effect on your browsing experience.
Necessary Always Enabled
Necessary cookies are absolutely essential for the website to function properly. This category only includes cookies that ensures basic functionalities and security features of the website. These cookies do not store any personal information.
Non-necessary
Any cookies that may not be particularly necessary for the website to function and is used specifically to collect user personal data via analytics, ads, other embedded contents are termed as non-necessary cookies. It is mandatory to procure user consent prior to running these cookies on your website.
SAVE & ACCEPT
45 shares