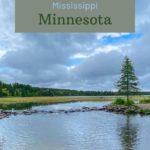 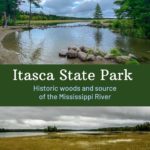 Itasca State Park has a special place is the memories of both me and Kris because like so many others, we both walked across the Mississippi River at this spot as kids. I remember it especially because I walked across the slippery rocks and fell and bruised the hell out of my hip, which was probably not as painful as the accompanying embarrassment for a ten-year-old boy. But that was then.

This time, I walked across the river itself, just downstream from the exposed rocks. Although it was a little harder on my bare feet, it was not nearly as dangerous, either to my ego or my body.

It should be noted here perhaps that the channel of the Mississippi as it emerges from the lake was bulldozed in the 1930s by the Civilian Conservation Corps, to create a more pleasant experience for visitors. The project included the draining of the surrounding swamp, the digging of a new channel, and the installation of a man-made rock rapids. Those are the rocks that many visitors walk across today.

But there’s a lot more to Itasca State Park than the headwaters, although that’s certainly the part of the park that gets the most traffic. Itasca State Park has a history that’s worth considering as you cover its considerable wilderness. Probably most important is that it still has a lot of wilderness, thanks to the relatively early reservation of the park lands and the prohibition of logging. The importance of that act establishing the first state park in Minnesota is driven home by one map along the Wilderness Drive that shows that Minnesota was once nearly covered with old growth forests, but the only ones that remain in the state are at Itasca State Park and in Voyageurs National Park.

Lake Itasca got its name long before it was a park. In 1832, Anishinabe guide Ozawindib, led the explorer Henry Rowe Schoolcraft to what the native Americans knew as the true source of the great river. Schoolcraft created the name Itasca from his imperfect knowledge of Latin words veritas and caput, meaning “truth” and “head.” (The actual Latin for true head would be caput verum, but Itasca sounds better, no?)

Today, Schoolcraft’s name is remembered on many explanatory signs in the park, and on the Schoolcraft trail that circles the north arm of the lake where the headwaters emerge. At the end of the west path of Schoolcraft Trail, you’ll get a view of Schoolcraft Island.

The headwaters spot and the nearby Schoolcraft trail are a great spot to start your Itasca visit. The visitors center at the Headwaters, named for Mary Gibb, the first woman state park commissioner in the United States, has an abundance of placards with information about the history, geology, and most everything else about the origin of the Mississippi. There’s also a nice gift shop featuring plenty of well-designed souvenir t-shirts that commemorate your walk across the Mississippi.

After spending some time at the headwaters, be sure to take the Wilderness Drive from there. Either by car or bike, you can make about a 10-mile loop through a good portion of the remaining old growth forest around Lake Itasca. Along the drive, there are several spots where you can park and take a hike through the forest. (Whatever you do, don’t forget your insect repellent. If you need a reminder of why Minnesota is famous for its mosquitoes, here you have it.)

Definitely worth the walk are the the Landmark Trail and Blowdown Trail, which are right across the road from each other. In both, you’ll get an up close view of the forest in its many states. You’ll see areas that were once logged, and how they’ve regrown. On the Blowdown Trail you’ll see areas that lost all the biggest trees to wind, and the effect that’s had (think replacement of the pines with birches.) In all, pay attention to the signs along the trail and learn a lot about the life cycles of a forest.

And, while you do this, don’t forget to thank the visionaries who saved what is now Itasca State Park from the clear cutters who denuded the rest of the state of trees in the 19th and early 20th Centuries. It was the first Minnesota State Park and it was a struggle to preserve the landscape from the powerful forestry interests.

In the late 1800s, historian, anthropologist and land surveyor Jacob V. Brower, came to the Lake Itasca area to settle a dispute over the actual location of the source of the mighty Mississippi. Brower saw the region’s natural resources being quickly degraded by logging, and determined to protect the pine forests for future generations. It was Brower’s efforts that led the Legislature to establish Itasca as a Minnesota State Park on April 20, 1891, (by a margin of only one vote.)

Where to stay near Itasca State Park

Itasca State Park is probably the most developed park in the state system. It is one of the most visited. There are ample camping, hiking, and boat launching facilities. Check the DNR site for more details. Itasca also has the famous Douglas Lodge, built at the beginning of the 20th Century, and other cabins, if outdoor camping is not your specialty. Also, there are plenty of lodging opportunities in nearby Park Rapids, about 20 miles from Itasca.

We stayed in Park Rapids at the charming Red Bridge Inn in a very comfortable room with its own patio overlooking Fish Hook Lake. Especially worth mentioning are the breakfasts. The proprietor Chris made us tasty and hearty fare enough to fuel a full day’s hiking in the park. One day quiche, the next French Toast. All with all the trimmings of a full American breakfast. Yum.

This website uses cookies to improve your experience while you navigate through the website. Out of these cookies, the cookies that are categorized as necessary are stored on your browser as they are essential for the working of basic functionalities of the website. We also use third-party cookies that help us analyze and understand how you use this website. These cookies will be stored in your browser only with your consent. You also have the option to opt-out of these cookies. But opting out of some of these cookies may have an effect on your browsing experience.
Necessary Always Enabled
Necessary cookies are absolutely essential for the website to function properly. This category only includes cookies that ensures basic functionalities and security features of the website. These cookies do not store any personal information.
Non-necessary
Any cookies that may not be particularly necessary for the website to function and is used specifically to collect user personal data via analytics, ads, other embedded contents are termed as non-necessary cookies. It is mandatory to procure user consent prior to running these cookies on your website.
SAVE & ACCEPT
414 shares