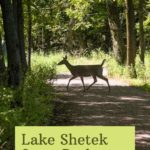 Lake Shetek is the largest lake in southwestern Minnesota and the Lake Shetek State Park that borders its east side makes for ample recreation opportunities.

I showed up in late morning at the entrance and asked the attendant for the best place to take a short hike. She recommended Loon Island, and I headed straight for it. To get there, drive to the end of the road to the boat landing parking lot. From there, you walk out of the lot to your right then curl around a bit to get to a stone and gravel causeway (built in the 1930s by the WPA) that leads out to the island, where a one-mile loop hike around the circumference of the island awaits.

Once you get to the island and walk off to the right to start your circle, you’re met with several signs that describe the environment you’re walking through. Among the first things you’ll learn about Loon Island is that it’s misnamed. The early settlers to the Lake Shetek area noticed that certain birds were, according to them, diminishing the lake’s fish population so, in true early settler character, they undertook to eliminate the birds, which they were quite successful at. Ironically, the birds they endeavored to eliminate were cormorants, not loons. They were so successful that there are still no cormorants in the vicinity.

The other interesting fact is that Dutch Elm Disease killed off most of the island’s elm trees in the 1970s. This had the interesting side effect of attracting birds that nest in “cavities,” e.g. Downy and Red Headed Woodpeckers, and eventually, Chickadees, Wrens, and Fly Catchers. The woodpeckers supposedly have moved on, but the island did abound with the opportunity to see birds flitting about among, what we’re told, were a lot of Basswood Trees. The Basswood, we learned from another sign, flourished when the dead elms fell, leaving abundant sunny areas to the smaller trees.

As I said, the Loon Island route is about a mile and took a little less than an hour to cover the groomed level path and stop for signs and photos. But, since I had some more time, I came off the island and followed another path, this one to the left as you face the lake, from the boat landing parking lot.

This wooded path along the main lake shore takes you about half a mile to the open picnic area and the camping area, where I saw multiple families setting up their tents on the marked spots right on the lake shore. (There are also cabins available for reservation, if you so desire; see below for the reservation link.)

From there, you continue skirting the shore. The trail changes names to the Monument Trail, and you continue another half mile to the monument. The monument, erected in 1924, sits on the grave site of the settlers, mostly women and children, who were killed by the Dakota Indians in 1862. It’s a bit heartbreaking to read the names and ages of the children, some as young as two years old. You can read a bit more about the Dakota Wars in Minnesota here.

After spending some reflective time at the monument, you can backtrack to the boat landing parking lot, and, if you like, take a slightly different route that takes you a bit more inland before taking you back to the picnic area and back to your car. Alternatively, you can continue past the monument and pick up the trail that takes you another mile and a half around Smith Lake before you make your way back to the car.

While you’re in the area, consider visiting the Pipestone National Monument and the Jeffers Petroglyphs sites. Each is about 40 miles from Lake Shetek State Park, although in opposite directions. They’d make great day trips from your Shetek camp site.

This website uses cookies to improve your experience while you navigate through the website. Out of these cookies, the cookies that are categorized as necessary are stored on your browser as they are essential for the working of basic functionalities of the website. We also use third-party cookies that help us analyze and understand how you use this website. These cookies will be stored in your browser only with your consent. You also have the option to opt-out of these cookies. But opting out of some of these cookies may have an effect on your browsing experience.
Necessary Always Enabled
Necessary cookies are absolutely essential for the website to function properly. This category only includes cookies that ensures basic functionalities and security features of the website. These cookies do not store any personal information.
Non-necessary
Any cookies that may not be particularly necessary for the website to function and is used specifically to collect user personal data via analytics, ads, other embedded contents are termed as non-necessary cookies. It is mandatory to procure user consent prior to running these cookies on your website.
SAVE & ACCEPT
208 shares