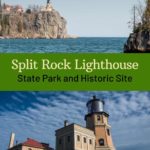 A November Lake Superior gale that wrecked nearly 30 ships in 1905 prompted the construction of the Split Rock Lighthouse. When the U.S. Lighthouse Service completed Split Rock Light Station in 1910, it soon became one of Minnesota’s best known destinations.

Today, it’s still an iconic spot overlooking the rocky shore of Lake Superior. A visit is worthwhile to learn the historical context and to serve as a spur to learning more about the history of shipping, and the more than 350 shipwrecks that litter the bottom of what was once called “the most dangerous body of water in the world.”

The visit to the lighthouse is a bit limiting because the building itself is not open to the public. You’ll have to be content with some photos of the mechanics of the huge beacon’s apparatus that you can see displayed by a docent on a table outside the lighthouse. Also, the support building alongside the lighthouse has more information on Lake Superior shipping and the lighthouse’s role in securing it for 59 years until it was supplanted by new marine navigational technology in 1969.

A couple of little tidbits that I found particularly interesting about the workings of the lighthouse: Before it was electrified, the rotation of the huge lens was accomplished by a windup mechanism not unlike that of an old grandfather clock. A 200 pound weight was raised by a hand winch that had to be cranked by the lighthouse keeper every hour and 40 minutes. As the weight slowly descended again it turned gears which rotated the lens.

And, the huge heavy lens was supported on a bed of liquid mercury which permitted nearly frictionless movement. The mercury’s other crucial characteristic was that it operated without any degradation at very low temperatures–which are known to happen on the North Shore of Lake Superior.

You can get a lot more good information on the history of the Split Rock Lighthouse at the Minnesota Historical Society site.

The lighthouse is on the grounds of Split Rock Lighthouse State Park. There’s more to do there than tour the lighthouse site itself. For example, some of the hiking trails at the park will give you dramatic views like this one.

You can see all my posts from my latest trip to the North Shore here.

Where to stay on the North Shore

I based my latest exploration of the North Shore from a beautiful apartment in Two Harbors that I found on AirBnB. If you book it, we’ll receive a small commission at no additional cost to you. If you’re not an AirBnB member, join AirBnb here, and you’ll get up to $65 off your first stay.

Any cookies that may not be particularly necessary for the website to function and is used specifically to collect user personal data via analytics, ads, other embedded contents are termed as non-necessary cookies. It is mandatory to procure user consent prior to running these cookies on your website.