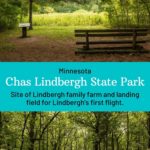 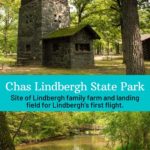 We visited the Charles A. Lindbergh State Park near Little Falls on our way back to the Twin Cities from Lake Itasca in mid September. As usual during the Covid-19 restrictions, the adjacent historic Lindbergh home was not open to visitors, so we contented ourselves with a picturesque hike on the old Lindbergh farm.

After Charles A. Lindbergh, Jr. made his historic first trans-Atlantic solo flight, his celebrity focused attention on his boyhood home. The house and farm had been used by the Lindbergh family primarily as a summer home, but Charles, Jr. managed the farm full time for two years before he went to college in 1920. Lindbergh’s father, Charles A. Lindbergh, Sr., for whom the park is actually named, was a progressive Republican Congressman who represented central Minnesota from 1907-1917.

The Lindbergh family donated the farm as a park to the state of Minnesota in 1931, four years after Charles Jr.’s historic flight and one year after the death of Charles, Sr. The home was no longer in use by the family and souvenir seekers had caused extensive damage to the home. The donation was seen as an attempt to preserve the home.

The 110 acres donated by the family is now expanded to more than 570 acres and includes, in addition to the Lindbergh home, a stone water tower and picnic pavilion constructed by the Works Progress Administration (WPA) during the 1930s. Along with the Lindbergh home, the WPA structures are now on the National Register of Historic Places.

The picnic area is the starting point for the 2.4 mile hike along Pike Creek on the west side of the park. You go down a bit of a steep path that leads to a bridge over the creek and puts you on a wooded loop to the south. After making the loop and passing the spot where Charles Jr. landed his first plane on the farm in 1923, you’ll continue through more wooded area until you come out into a restored prairie meadow. After walking along the meadow for a while, you have your choice of crossing the creek again and walking down the east side, or staying on the path on the west side. Either way, the path takes you back into the wood that borders the creek and back to the picnic area.

But, there’s another possibility at the north end of the loop, and that is where we deviated from the creek paths and instead took the route that leads through the campsites and back to the parking and picnic area via a paved road. Frankly, the Pike Creek area was one of the worst areas for mosquitoes we’ve run into. And for Minnesota, that’s saying something. The insect repellent just wasn’t doing its job, even after second application. So that’s why we decided to take the parallel wide paved road. The road still runs through the woods, but its width gets you out of the dense realm of the ferocious pests.

If you’re into camping, the park has 38 camping sites, 15 with electrical hookups. There is also a group campsite that accommodates up to 30 people, one hike-in campsite, and a canoe-in site along the Mississippi River.

There is also a section of the park, called the Little Elk Area, which is reached by driving a few miles north and features hiking paths along the juncture of the Little Elk River and the Mississippi.

You can see and download a map of Charles A. Lindbergh State Park here.

This website uses cookies to improve your experience while you navigate through the website. Out of these cookies, the cookies that are categorized as necessary are stored on your browser as they are essential for the working of basic functionalities of the website. We also use third-party cookies that help us analyze and understand how you use this website. These cookies will be stored in your browser only with your consent. You also have the option to opt-out of these cookies. But opting out of some of these cookies may have an effect on your browsing experience.
Necessary Always Enabled
Necessary cookies are absolutely essential for the website to function properly. This category only includes cookies that ensures basic functionalities and security features of the website. These cookies do not store any personal information.
Non-necessary
Any cookies that may not be particularly necessary for the website to function and is used specifically to collect user personal data via analytics, ads, other embedded contents are termed as non-necessary cookies. It is mandatory to procure user consent prior to running these cookies on your website.
SAVE & ACCEPT
176 shares