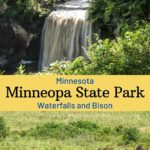 The Minneopa State Park, named for the creek gorge that defines the park, is split into two sections. The lower section, south of Hwy. 68, features the Minneopa Falls, which are only a short walk from the parking and picnic area.

There’s a paved walkway that crosses a bridge over the creek where you can see the smaller upper falls. The path then leads around to the higher falls downstream only a hundred yards or so. It’s a pleasant tree lined walk that only takes 20 minutes to complete.

After getting a look at the falls, you should drive the bison route through the upper part of the park. I did the two-mile tour through the bison enclosure twice, but the bison were not cooperating by grazing near the road. (Note: the bison drive is currently open every day except Wednesdays. But that is subject to change. Be sure to check with the park before you go to make sure you can do the drive. The park phone is (507) 389-5464.)

But on my second pass, I decided to get out and have a look at the stone Seppman Mill on the hill at the far end of the bison drive. I walked past the mill and continued down the path on the south end of the bison enclosure. About 50 yards past the mill, the view of the valley expanse opens up and, low and behold, below was the bison herd, moving and grazing through the tall grass a quarter of a mile below.

(Note: there is a hiking option of about a four mile round trip from the Red Fox parking area up to the Seppman Mill. Or you can drive to the Mill, and walk down and then back up the trail that skirts the south side of the bison enclosure.)

I watched the bison for about half an hour and they were in constant motion. Graze a bit, walk a bit, graze, walk, repeat. No sudden movement, but a constant flow toward the east, led by a big bull and followed by the cows and the very young. Nothing exciting except for imagining what it must have been like when the herd was 40,000 instead of 40, and the prairie stretched endlessly instead of being hemmed by cornfields and county roads.

Since park visitors are not allowed anywhere near the bison, imagination is as close as you can get.

I drove back to the main Red Fox campground and took the short trail from the parking lot down a gentle slope for about half a mile to where the Minneopa creek, now considerably more sedate than the upstream falls area, converges with the Minnesota River that forms the northern boundary of the park. A lovely shaded, if mosquito riddled, 45 minute walk though the woods, and providing a nice contrast to the prairie setting of the bison.

The Minneopa State Park is just a few miles south of Mankato. Follow Hwy. 169 south out of Mankato and turn west on Hwy. 68 for a mile or so to the entrance to the north side of the park. Follow the signs for bison for that side. Or, you can follow the signs for waterfalls and take a turn off 68 to the south for that side of the park. The roads are well marked leading you around the park.

If bison are your thing, check out Blue Mounds State Park about a two-hour drive from Minneopa. They are the two parks in Minnesota where bison herds have been reintroduced.

Check out our recommendations for what to carry in your hiking day pack when you check out the extensive Minnesota State Park system.

And, see the list of all Minnesota State Parks. We’re adding our commentary to them as we visit.

This website uses cookies to improve your experience while you navigate through the website. Out of these cookies, the cookies that are categorized as necessary are stored on your browser as they are essential for the working of basic functionalities of the website. We also use third-party cookies that help us analyze and understand how you use this website. These cookies will be stored in your browser only with your consent. You also have the option to opt-out of these cookies. But opting out of some of these cookies may have an effect on your browsing experience.
Necessary Always Enabled
Necessary cookies are absolutely essential for the website to function properly. This category only includes cookies that ensures basic functionalities and security features of the website. These cookies do not store any personal information.
Non-necessary
Any cookies that may not be particularly necessary for the website to function and is used specifically to collect user personal data via analytics, ads, other embedded contents are termed as non-necessary cookies. It is mandatory to procure user consent prior to running these cookies on your website.
SAVE & ACCEPT
155 shares