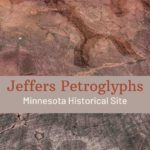 The Jeffers Petroglyphs historic site is home to about 5,000 Native American sacred rock carvings, also called petroglyphs, made by the the earliest residents of Minnesota. The site is located on a Sioux Quartzite outcropping in Cottonwood County in southwestern Minnesota.

This Jeffers Petroglyphs site is part of the Red Rock Ridge prairie landscape; a series of prairie preserves associated with a discontinuous, 23-mile long ridge of Sioux quartzite outcrops that also include The Nature Conservancy’s Red Rock Prairie Preserve.

Because of the nearness of the hard rock to the surface, the land around the Jeffers Petroglyphs was never farmed because it could not be plowed. Hence, the surrounding prairie is “virgin” prairie and did not need to be restored.

The exact history of the ancient carvings and the people who carved them is not known, but the earliest carvings are thought to be around 7000 years old. Some of the most interesting symbols are of an early hunting tool called an atlatl, which was a curved stick used to hurl spears or darts. The atlatl dates from before the bow and arrow.

Other carvings, such as thunderbirds, turtles, and shamans, are typical icons of later tribes such as the Otoe, Dakota, and Iowa Indians. These are believed to be from 1000 years ago to as little as 250 years ago.

The latest Indian carvings are thought to date from around 1760, and it’s notable that there are no depictions of horses anywhere at the site. This leads to the conclusion that the Indians stopped carving at the site around that 1760 date. Beginning in about the 1820s, white settlers began to leave their marks on the stones as well.

The time span of the carvings, probably more than 7000 years, makes the Jeffers Petroglyphs site one of the longest used sacred sites in the world.

From the visitor center, you take a quarter mile walk on a crushed gravel path slightly uphill to the exposed rock where the petroglyphs were carved. There, you will most likely find a Historical Society docent (or two) who will highlight the carvings with a spray bottle of water and give you an introduction to the iconography and history of the carvings.

At the end of your tour of the petroglyph area, you have the choice of returning to the visitor center and parking lot the way you came, or taking a longer circular route on a mowed path through the virgin prairie back to your car. That route is about three quarters of a mile and will take you through some beautiful landscape and past a bison rub–a stone outcropping where bison once rubbed off their winter coats in favor of lighter spring apparel. Note one edge of the rock is rubbed very smooth.

The prairie walk is also worth it because of its solitude. The Dakota and other Indians revered sites like these because of the vistas, especially to the west, were regarded as sacred. Also, certain geological formations have special qualities that make them stand out from their surroundings. To Native Americans, rock formations emerging from the earth are a link between the physical and spiritual worlds.

The Jeffers Petroglyphs site is a little more than a two-hour drive from the Twin Cities. Here are the Google map coordinates.

Opening hours at Jeffers Petroglyphs are very limited through the middle of October 2020. If you’re planning on visiting, check the opening hours here and make your reservations online in advance. The site closes for the season after October 17, 2020.

The site is managed by the Minnesota State Historical Society.

While in southwestern Minnesota, there are many more important Native American sites, including many that are illustrative of the history of the conflicts between the Indians and the Whites in the mid 19th Century. Another significant sacred site is the Pipestone National Monument, about an hour away from the petroglyphs site.

This website uses cookies to improve your experience while you navigate through the website. Out of these cookies, the cookies that are categorized as necessary are stored on your browser as they are essential for the working of basic functionalities of the website. We also use third-party cookies that help us analyze and understand how you use this website. These cookies will be stored in your browser only with your consent. You also have the option to opt-out of these cookies. But opting out of some of these cookies may have an effect on your browsing experience.
Necessary Always Enabled
Necessary cookies are absolutely essential for the website to function properly. This category only includes cookies that ensures basic functionalities and security features of the website. These cookies do not store any personal information.
Non-necessary
Any cookies that may not be particularly necessary for the website to function and is used specifically to collect user personal data via analytics, ads, other embedded contents are termed as non-necessary cookies. It is mandatory to procure user consent prior to running these cookies on your website.
SAVE & ACCEPT
171 shares