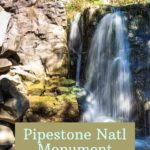 The Pipestone National Monument, managed by the United States National Park Service, is the site of ancient quarries where Native Americans have dug out the red stone used for the carving of their ritual pipes. As noted in the seminal text of Native American religious beliefs and practices, Black Elk Speaks, “When you pray with this pipe, you pray for and with everything.” The American Indians believed that the smoke from a pipe made a connection to the Great Spirit by carrying prayers aloft.

Native Americans have quarried pipestone pipestone from this site for centuries. Only members of registered Indian tribes are allowed to quarry at the site now.

The pipestone, or catlinite, is used even today make ceremonial pipes that are important to traditional Plains Indian religious practices. The quarries are sacred to many of the tribes of North America, including the Dakota, Lakota, and other tribes. The quarries were neutral territory where all Nations could quarry stone for ceremonial pipes. The Sioux tribes took control of the quarries around 1700, but the Minnesota pipestone has been found inside North American burial mounds dating from long before that.

You can read more stories about the importance of pipes on the National Park service site.

Your visit to the Pipestone National Monument will consist of a three quarter mile walk through the prominent Sioux Quartzite outcroppings. There are a couple of spots where you can climb stone stairs to the top of the rock formations in order to get a better look at the entire site.

There are three spots on the upper path worth noting: the Leaping Rock, the Oracle, and the carved inscription left by early white Minnesota explorers known as the Nicollet Expedition.

Another interesting bit of Pipestone history is that the Dakota warrior chief Inkpaduta camped with his band, and their captives, at the Pipestone site after they killed more than 30 white settlers in what has come to be called the Spirit Lake Massacre in 1857. Spirit Lake, in Iowa, is about 90 miles southeast of Pipestone. The attacks there was one of many incidents that caused increasing hostility between Indians and Whites which eventually led to the 1862 Indian war in southern Minnesota.

After descending from the upper walking trail, your tour continues along the lower path until you exit the area of the outcroppings and follow the creek from the waterfall through the tallgrass prairie down a gentle slope and back toward the visitor center. If you want, you can veer off the path near the center down a cut and into an active quarry area where you may see people working at the hard quartzite trying to get down to the pipestone layer.

When it’s open, the visitor center features exhibits about the natural and cultural history of the site, including a petroglyph display. There is also an orientation video about the history of the pipestone quarries.

Pipestone National Monument is in far southwestern Minnesota and is about a 3 1/2 drive from the Twin Cities. That’s a bit long for a day trip, and I stayed overnight at the Pipestone Inn. I suggest combining any trip to Pipestone with a visit to the Jeffers Petroglyphs, which are between the Twin Cities and Pipestone. The Petroglyphs site is open much less than the Pipestone site, so plan your visit accordingly.

While you’re in town, be sure to check out the Pipekeepers shop at 400 N. Hiawatha Ave. A very nice collection of pipes and other Native crafts. See the work of contemporary pipe makers and learn a bit about how pipes are made.

Note: as of September 2020, the visitors center at the National Park site is closed due to Covid 19 restrictions, but you can still grab an informational brochure there and take the three quarter mile path through the outcropping site. Check the NPS site for information on when the visitors center might reopen. There are exhibits in the center well worth seeing.

The Pipestone National Monument is one of the U.S. National Park sites in Minnesota.

This website uses cookies to improve your experience while you navigate through the website. Out of these cookies, the cookies that are categorized as necessary are stored on your browser as they are essential for the working of basic functionalities of the website. We also use third-party cookies that help us analyze and understand how you use this website. These cookies will be stored in your browser only with your consent. You also have the option to opt-out of these cookies. But opting out of some of these cookies may have an effect on your browsing experience.
Necessary Always Enabled
Necessary cookies are absolutely essential for the website to function properly. This category only includes cookies that ensures basic functionalities and security features of the website. These cookies do not store any personal information.
Non-necessary
Any cookies that may not be particularly necessary for the website to function and is used specifically to collect user personal data via analytics, ads, other embedded contents are termed as non-necessary cookies. It is mandatory to procure user consent prior to running these cookies on your website.
SAVE & ACCEPT
296 shares