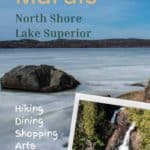 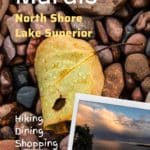 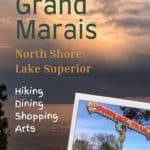 Grand Marais, far up the North Shore, is the gateway to the Gunflint Trail and Boundary Waters Canoe Area–or maybe the last stop before Canada. You might think of Grand Marais as being on the way to somewhere else, but stay a while and you’ll understand why Grand Marais is a worthwhile destination in its own right.

The history of Grand Marais carves through centuries of human activity, from Native People (Ojibwe) to French explorers and traders. Beaver trading encouraged by John Jacob Astor’s expedition increased traffic from the north woods to Lake Superior on what is now the Gunflint Trail. And Grand Marais’ natural double bay harbor proved useful for fishing and lumber enterprises. By the early 20th Century, recreational hunters and fishermen started visiting this area.

Tip: To imagine fishermen’s lives–in all seasons–over a hundred years ago, we checked out the historic boat and fishing house on display at the end of the Grand Marais Recreation Area and campground. Hungry historians will enjoy a stop at Naniboujou Lodge built by Chicago businessmen as an exclusive club in the 1920s. It’s managed to survive under a series of owners, and is open seasonally for meals in the impressive, painted-lumber main lodge.

Also, if history is of interest, the U.S. National Park site Grand Portage National Monument is about half an hour further up Highway 61. There’s a reconstruction there of the original fur trading post where the Voyageurs and Ojibwe Indians traded with the British North West Company.

The centerpiece of Grand Marais shopping is, of course, the outfitters–Grand Marais Outfitters, Lake Superior Trading Post, and several smaller shops. Here you can gear up for canoeing and hiking expeditions, accounting for clothing, camping, cooking and navigation. Impending adventure or not, we can spend hours in good outfitters’ stores like these.

Tip: Since you are staying an extra day in Grand Marais, you’ll have time to stroll the few downtown blocks of shops, and browse each one. The Ben Franklin store is classic: where else can you find last minute toys for the kids, hunting boots, and a kitchen spatula all in one aisle? We also enjoyed Birchbark Books and Gifts, at 11 1st Ave West, an eclectic clothing and gift shop with a pretty good book section, not far from Beth’s Fudge & Gifts.

Grand Marais hosts a number of festivals, notably around the arts. Weekend festivals have evolved into year-round enterprises, so visitors are likely to find music, visual arts, and other cool events any time of year.

We were tipped off to the fast-growing North House Folk School, which is well worth a visit, if just to explore the small shop of hand-crafted items. The complex of buildings hosts seminars and workshops on everything from cheese-making and cooking, to needlework and basketry, to woodworking, framing, and boat-building.

The Grand Marais Art Colony is a nonprofit, member-supported art center founded in 1947. In addition to organizing the annual Grand Marais Arts Festival, the Arts Colony hosts over 200 classes per year, in a variety of media. The Art Colony also offers professional studio access and organizes other exhibits and events throughout the year.

The Grand Marais Playhouse is a non-profit, volunteer driven, community theater founded in 1971. You can purchase tickets for events at the box office or online. Online tickets are recommended as our Box Office is not open regular hours. Performance dates vary through out the year.

If you tire of walking around town, be assured it’s easy to get out into the woods. Just up the hill from Grand Marais are the popular trails of Pincushion Hill.

Also, 24 miles down (southwest) Highway 61 is a turnoff for the Oberg Mountain Trail. As the name suggests, the trail circumnavigates Oberg Mountain, more than 1000 feet about the level of Lake Superior. Count on some spectacular views of the Superior National Forest below you as well as the North Shore stretching off into the distance. Oberg Mountain is especially beautiful during the fall color season.

If you’re going to be day hiking around Grand Marais, be sure to check out our recommendations for what to carry in your hiking day pack.

You may as well buy a Minnesota State Park annual pass; several other State Parks along the North Shore are gorgeous places to hike or capture views over the lake.

You will need to spend extra nights in Grand Marais to try all the restaurants recommended to us. Our Minnesota friends suggest The Angry Trout or The Crooked Spoon. A helpful local favors the Harbor House Grille or My Sister’s Place. We stumbled into the Dockside Fish Market during a rain shower and happily found a few tables and some fine chowder and sandwiches at the deli counter. The region’s popular brews can be sampled at Gunflint Tavern, or try the local stuff at Voyageur Brewing.

Where to stay in Grand Marais

We chose to visit Grand Marais right after the Labor Day weekend. The leaves hadn’t quite turned, but the midweek availability at Best Western Plus Superior Inn location was just right. Because we usually pass through Grand Marais on our way to the Boundary Waters, we were pleased being pampered at this property located right on the water on the quieter eastern bay of Grand Marais. It’s an easy walk to the main shopping and dining district, and just around the corner from the food co-op and another grocery store. Our room included a balcony overlooking the lake, a gas fireplace, a steam shower (wow, now I want to visit in the winter), a Jacuzzi, and enough room for the king bed, desk area, and two (!) comfortable chairs. We ventured out of the room long enough to meet other travelers at the friendly lobby bar, and got some work done warm dining area with a soaring fireplace and plenty of electrical outlets. For a longer stay, we might have used the kitchenette with sink, microwave and refrigerator.

Other Attractions near Grand Marais

If you’re a fan of waterfalls, there are two of the best examples of interesting falls within easy driving distance of Grand Marais.

To the north 45 miles to the Canadian Border is the High Falls at Grand Portage State Park. The falls on the Pigeon River are the highest in Minnesota. The Pigeon River is the border with Canada, so technically the falls are half in the United States and half in Canada.

On the way to Grand Portage, stop at Judge C.R. Magney State Park, only 14 miles north along Highway 61. If you’re willing to hike 1.5 miles uphill, you can see what is perhaps the most interesting geological feature of Minnesota, the Devil’s Kettle falls. From an overlook, you can see the falls on the Brule River split around a large rock. The east side falls into the river, but the west side falls into a hole, seemingly never to emerge. It’s a mystery that’s only recently been sorted out by the Minnesota DNR.

Finally, there are many other waterfalls along the North Shore worth a visit, if that’s your thing.

See more or our recommendations for your road trip along the North Shore of Lake Superior in this post.

It’s hard to fathom the world’s largest freshwater lake based only on statistics. Standing on the pebbly cove of Grand Marais or the rocky shores nearby, the impressions are of cold water, endless horizon, big skies and unpredictable weather beside a wilderness forest. The lake itself is mesmerizing, from any angle.

If you like stats, though, you’ll want to know that Superior is roughly 350 miles long by 160 miles wide, is an average of 489 feet (149 meters) deep, and holds as much water as all the other Great Lakes combined plus three more Lake Eries. Visibility in these deep, cold waters is 65-75 feet. By area, it’s the largest freshwater lake in the world. (Lake Baikal in Russia is the largest freshwater lake in the world by volume and the world’s deepest lake at 5,354 feet–1,632 meters.)

Tip: Walk out to the old lighthouse beyond the Coast Guard station to feel the wind and gaze into the clear water. Or get a lakeside hotel room and spend some time on your balcony to take in the sights, day or night.

In Grand Marais, the summers are comfortable and the winters are freezing, snowy, and windy. You can count on the skies being partly cloudy year round. The temperature typically varies from 8F to 70F and is rarely below -13F or above 78F.

The average high in prime tourist season of July and August is 72F (22C); the average low temperature in those months is 52F (11C.) So, the evenings can be cool. Average rainfall in the summer months is between 2 and 4 inches (64-92 mm) per month. So don’t forget a rain jacket.

It’s probably doesn’t need to be said, but check the forecast before you make any Grand Marais plans. And, always, no matter the season, bring several layers of clothing.

4 thoughts on “What to do in Grand Marais”

This website uses cookies to improve your experience while you navigate through the website. Out of these cookies, the cookies that are categorized as necessary are stored on your browser as they are essential for the working of basic functionalities of the website. We also use third-party cookies that help us analyze and understand how you use this website. These cookies will be stored in your browser only with your consent. You also have the option to opt-out of these cookies. But opting out of some of these cookies may have an effect on your browsing experience.
Necessary Always Enabled
Necessary cookies are absolutely essential for the website to function properly. This category only includes cookies that ensures basic functionalities and security features of the website. These cookies do not store any personal information.
Non-necessary
Any cookies that may not be particularly necessary for the website to function and is used specifically to collect user personal data via analytics, ads, other embedded contents are termed as non-necessary cookies. It is mandatory to procure user consent prior to running these cookies on your website.
SAVE & ACCEPT
249 shares